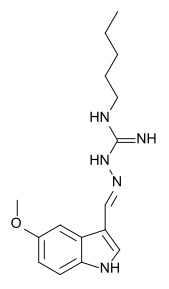 Tegaserod is a 5-HT4 agonist manufactured by Novartis and sold under the names Zelnorm and Zelmac for the management of irritable bowel syndrome and constipation.Approved by the FDA in 2002, it was subsequently removed from the market in 2007 due to FDA concerns about possible adverse cardiovascular effects. Before then, it was the only drug approved by the United States Food and Drug Administration to help relieve the abdominal discomfort, bloating, and constipation associated with irritable bowel syndrome. Its use was also approved to treat chronic idiopathic constipation

The drug functions as a motility stimulant, achieving its desired therapeutic effects through activation of the 5-HT4 receptors of the enteric nervous system in the gastrointestinal tract. It also stimulates gastrointestinal motility and the peristaltic reflex, and allegedly reduces abdominal pain. Additionally, tegaserod is a 5-HT2B receptor antagonist.

On March 30, 2007, the U.S. Food and Drug Administration requested that Novartis withdraw Zelnorm from shelves.The FDA alleges a relationship between prescriptions of the drug and increased risks of heart attack or stroke. An analysis of data collected on over 18,000 patients demonstrated adverse cardiovascular events in 13 of 11,614 patients treated with Zelnorm (a rate of 0.11%) as compared with 1 of 7,031 patients treated with placebo (a rate of 0.01%). Novartis alleges all of the affected patients had preexisting cardiovascular disease or risk factors for such, and further alleges that no causal relationship between tegaserod use and cardiovascular events has been demonstrated. On the same day as the FDA announcement, Novartis Pharmaceuticals Canada announced that it was suspending marketing and sales of the drug in Canada in response to a request from Health Canada. Some manufacturers in India, such as Cipla and Torrent Pharmaceuticals Ltd., seem to still have generic tegaserod available in their listings and some online merchants may be selling it, despite the drug being banned in India. In a large cohort study based on a US health insurance database, no increase in the risk of cardiovascular events were found under tegaserod treatment.

Email ThisBlogThis!Share to TwitterShare to FacebookShare to Pinterest
Labels: drugs, drugsinindia.com, indian medicine, medicin in india, Tegaserod is a 5-HT4 agonist manufactured by Novartis and sold under the names Zelnorm and Zelmac for the management of irritable bowel syndrome, what is acid reflux
Location: Kollam, Kerala 691001, India