Bisoprolol is a drug belonging to the group of beta blockers, a class of drugs used primarily in cardiovascular diseases. More specifically, it is a selective type β1 adrenergic receptor blocker. The FDA approved Duramed Pharmaceutical's application for Zebeta Oral Tablets as a new molecular entity on July 31, 1992. It has since been approved by the FDA for manufacture by Teva, Mylan, Sandoz, and Mutual Pharmaceutical Company.

Bisoprolol is used to treat high blood pressure, reduced blood flow to the heart (cardiac ischemia); congestive heart failure, preventative treatment before and primary treatment after heart attacks decreasing the chances of recurrence. During hypertension there is an elevated blood pressure, which is what bisoprolol targets. While in cardiac ischemia the drug is used to reduce the activity of the heart muscle and therefore reduce oxygen and nutrient demand, so reduced blood supply can still transport sufficient amounts of oxygen and nutrients.
Many beta-blockers are now available and in general they are all equally effective. There are, however, differences between them which may affect choice in treating particular diseases or individual patients.
Beta-blockers with a relatively short duration of action have to be given two or three times daily. Many of these are, however, available in modified-release formulations so that administration once daily is adequate for hypertension. For angina twice-daily treatment may sometimes be needed even with a modified-release formulation. Some beta-blockers such as atenolol, bisoprolol, carvedilol, celiprolol, and nadolol have an intrinsically longer duration of action and need to be given only once daily. 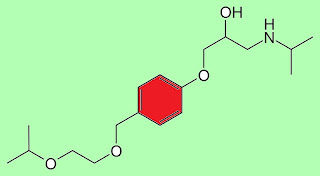 Bisoprolol is cardioprotective because it selectively and competitively blocks catecholamine (adrenalin) stimulation of β1 adrenergic receptors (adrenoreceptors), which are mainly found in the heart muscle cells and heart conduction tissue (cardio specific) but also found in juxtaglomerular cells in the kidney. Normally adrenalin and noradrenalin stimulation of the β1 adrenoreceptor activates a signalling cascade  which ultimately lead to increased contractility and increased heart rate of the heart muscle and heart pacemaker respectively. Bisoprolol competitively blocks the activation of this cascade and therefore decreases the adrenergic tone/stimulation of the heart muscle and pacemaker cells. Decreased adrenergic tone shows less contractility of heart muscle and lowered heart rate of heart pacemaker.
These are the favourable factors that are decreased and treat hypertension, heart attacks and ischemia. The decreases in contractility and heart rate are beneficial for hypertension because they reduce blood pressure but for preventive measures for heart attacks and cardiac ischemia these decreases in heart rate and contraction decrease the hearts demand for oxygen and nutrients; primary treatment post heart attacks is to prevent recurrence of the infarction.

A. Beta-Blockers (including Bisoprolol) -  IN ASMA / COPD
In general, beta-adrenergic receptor blocking agents (i.e., beta-blockers) should not be used in patients with bronchospastic diseases. Beta blockade may adversely affect pulmonary function by counteracting the bronchodilation produced by catecholamine stimulation of beta-2 receptors. If beta-blocker therapy is necessary in these patients, an agent with beta-1 selectivity (e.g., atenolol, metoprolol, betaxolol) is considered safer, but should be used with caution nonetheless. Cardioselectivity is not absolute and can be lost with larger doses.

B. Beta-Blockers (including Bisoprolol) -  In Beta-Blockers (including Bisoprolol)  -    Bradyarrhythmia/Av Block
The use of beta-adrenergic receptor blocking agents (aka beta-blockers) is contraindicated in patients with sinus bradyarrhythmia or heart block greater than the first degree (unless a functioning pacemaker is present). Due to their negative inotropic and chronotropic effects on the heart, the use of beta-blockers is likely to exacerbate these conditions.

C. Beta-Blockers (including Bisoprolol) -  In Cardiogenic Shock/Hypotension :
The use of beta-adrenergic receptor blocking agents (aka beta-blockers) is contraindicated in patients with hypotension or cardiogenic shock. Due to their negative inotropic and chronotropic effects on the heart, the use of beta-blockers is likely to further depress cardiac output and blood pressure, which can be detrimental in these patients.

D. Beta-Blockers (including Bisoprolol) -  In Hemodialysis
Therapy with beta-adrenergic receptor blocking agents (aka beta-blockers) should be administered cautiously in patients requiring hemodialysis. When given after dialysis, hemodynamic stability should be established prior to drug administration to avoid marked falls in blood pressure. The hemodynamic status should be closely monitored before and after the dose.

E. Beta-Blockers (including Bisoprolol) -  In Hypersensitivity
The use of beta-adrenergic receptor blocking agents (aka beta-blockers) in patients with a history of allergic reactions or anaphylaxis may be associated with heightened reactivity to culprit allergens. The frequency and/or severity of attacks may be increased during beta-blocker therapy. In addition, these patients may be refractory to the usual doses of epinephrine used to treat acute hypersensitivity reactions and may require a beta-agonist such as isoproterenol.

F. Beta-Blockers (Includes Bisoprolol)  - Diabetes
Beta-adrenergic receptor blocking agents (aka beta-blockers) may mask symptoms of hypoglycemia such as tremors, tachycardia and blood pressure changes. In addition, the nonselective beta-blockers (e.g., propranolol, pindolol, timolol) may inhibit catecholamine-mediated glycogenolysis, thereby potentiating insulin-induced hypoglycemia and delaying the recovery of normal blood glucose levels. Since cardioselectivity is not absolute, larger doses of beta-1 selective agents may demonstrate these effects as well. Therapy with beta-blockers should be administered cautiously in patients with diabetes or predisposed to spontaneous hypoglycemia.


BRANDS - Available on the strength 5mg and 2.5mg