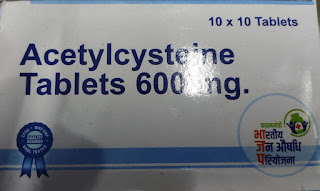 Intravenous acetylcysteine is indicated for the treatment of paracetamol (acetaminophen) overdose. When paracetamol is taken in large quantities, a minor metabolite called N-acetyl-p-benzoquinone imine (NAPQI) accumulates within the body. It is normally conjugated by glutathione, but when taken in excess, the body's glutathione reserves are not sufficient to inactivate the toxic NAPQI. This metabolite is then free to react with key hepatic enzymes, therefore damaging hepatocytes. This may lead to severe liver damage and even death by acute liver failure.
Available in JAN AUSHADHI price of RS 26 FOR 10 TAB
For this indication, acetylcysteine acts to augment the glutathione reserves in the body and, together with glutathione, directly bind to toxic metabolites. These actions serve to protect hepatocytes in the liver from NAPQI toxicity.
Although both IV and oral acetylcysteine are equally effective for this indication, oral administration is poorly tolerated because high oral doses are required due to low oral bioavailability, because of its very unpleasant taste and odour, and because of adverse effects, particularly nausea and vomiting. Studies conducted by Baker and Dilger suggest that the prior pharmacokinetic studies of acetylcysteine did not include acetylation as a reason for the low bioavailability of acetylcysteine. In the research conducted by Baker, it was concluded that oral acetylcysteine was identical in bioavailability to cysteine precursors. However, 3% to 6% of people given intravenous acetylcysteine show a severe, anaphylaxis-like allergic reaction, which may include extreme breathing difficulty (due to bronchospasm), a decrease in blood pressure, rash, angioedema, and sometimes also nausea and vomiting.[10] Repeated doses of intravenous acetylcysteine will cause these allergic reactions to progressively worsen in these people.
Several studies have found this anaphylaxis-like reaction to occur more often in people given IV acetylcysteine despite serum levels of paracetamol not high enough to be considered toxic.
In some countries, a specific intravenous formulation does not exist to treat paracetamol overdose. In these cases, the formulation used for inhalation may be used intravenously.
Posted by PRAVEEN JAS KOTTIYAM at 12:26 AM No comments: