Clonidine is a sympatholytic medication used to treat high blood pressure, ADHD, anxiety/panic disorder, and certain pain conditions. It is classified as a centrally acting α2 adrenergic agonist. An alternative hypothesis that has been proposed is that clonidine acts centrally as an imidazoline receptor agonist. 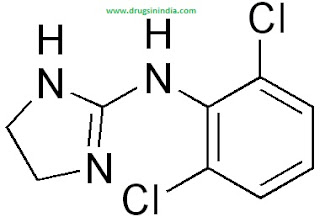 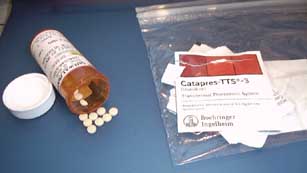 Clonidine has been investigated and prescribed first as an antihypertensive drug in the 1950s. It has found new uses later, including treatment of some types of neuropathic pain, opioid detoxification, sleep hyperhidrosis, and as veterinary anaesthetic drug. Clonidine is used to treat anxiety and panic disorder. It is also FDA approved to treat ADHD in an extended release form. It is becoming a more accepted treatment for insomnia, as well as for relief of menopausal symptoms.

Clonidine is increasingly used in conjunction with stimulants to treat attention-deficit hyperactivity disorder (ADHD), for which it is administered in late afternoon or evening for sleep, and because it sometimes helps moderate ADHD-associated impulsive and oppositional behavior, and may reduce tics, a problem in which a part of the body moves repeatedly and suddenly. Clonidine can be used in the treatment of Tourette syndrome (specifically for tics). Clonidine along with methylphenidate has been studied for treatment of ADHD. In 2010, the Food and Drug Administration approved the use of clonidine either as an adjunct to traditional stimulant therapy or as a monotherapy in the treatment of attention deficit hyperactivity disorder (ADHD).

Clonidine may be used to ease withdrawal symptoms associated with the long-term use of narcotics, alcohol and nicotine (smoking). It can alleviate opioid withdrawal symptoms by reducing the sympathetic nervous system response such as tachycardia and hypertension, as well as reducing sweating, hot and cold flushes, and general restlessness.The sedation effect is also useful although its side effects can include insomnia, thus exacerbating an already common feature of opioid withdrawal.
For some of the above reasons, clonidine is also used in some cases as an active placebo for narcotic analgesics in clinical trials and other lab experiments on morphine and its derivatives and mimics.

Clonidine can be used for migraine headaches and hot flushes associated with menopause.

Clonidine also has several off-label uses, and has been prescribed to treat psychiatric disorders including stress, sleep disorders, and hyperarousal caused by post-traumatic stress disorder, borderline personality disorder, and other anxiety disorders. Clonidine is also a mild sedative, and can be used as premedication before surgery or procedures. Its epidural use for pain during heart attack, postoperative and intractable pain has also been studied extensively.Clonidine has also been suggested as a treatment for rare instances of dexmedetomidine withdrawal.
Clonidine has also been found to prolong the effects of analgesia when used together with a local anesthetic such as ropivacaine or levobupivacaine.

MECHANISM OF ACTION
Clonidine treats high blood pressure by stimulating α2 receptors in the brain, which decreases cardiac output and peripheral vascular resistance, lowering blood pressure. It has specificity towards the presynaptic α2 receptors in the vasomotor center in the brainstem. This binding decreases presynaptic calcium levels, and inhibits the release of norepinephrine (NE). The net effect is a decrease in sympathetic tone.
It has also been proposed that the antihypertensive effect of clonidine is due to agonism on the I1-receptor (imidazoline receptor), which mediates the sympatho-inhibitory actions of imidazolines to lower blood pressure.

PREPERATION
Clonidine is typically available as tablets (Catapres, Dixarit), extended-release tablets (Kapvay), as a transdermal patch (Catapres-TTS), or as an injectable form to be given i.m., i.v. or epidurally - directly to the central nervous system. 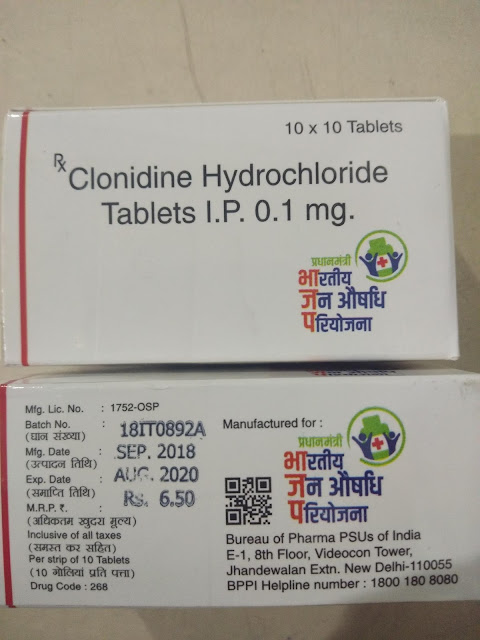