Diltiazem is a nondihydropyridine (non-DHP) member of the class of drugs known as calcium channel blockers, used in the treatment of hypertension, angina pectoris, and some types of arrhythmia.
It is also an effective preventive medication for migraine. It is a class 3 antianginal drug, and a class IV antiarrhythmic. It is a common adulterant of cocaine seized in the UK, and has been found to reduce cocaine cravings in rats, indicating it may prolong the "high" (see below). It incites minimal reflex sympathetic changes. It is based upon a 1,4-thiazepine ring.
Diltiazem is metabolized by and acts as an inhibitor of the CYP3A4 enzyme. 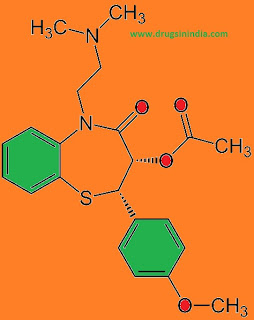 Diltiazem is a potent vasodilator, increasing blood flow and variably decreasing the heart rate via strong depression of A-V node conduction. Its pharmacological activity is somewhat similar to verapamil.
It is a potent vasodilator of coronary and peripheral vessels, which reduces peripheral resistance and afterload.
Because of its negative inotropic effect, diltiazem causes a modest decrease in heart muscle contractility and reduces myocardium oxygen consumption. Its negative chronotropic effect results in a modest lowering of heart rate, due to slowing of the sinoatrial node. It results in reduced myocardium oxygen consumption.
Because of its negative dromotropic effect, conduction through the AV (atrioventricular) node is slowed, which increases the time needed for each beat. This results in reduced myocardium oxygen consumption.

The drug is indicated for angina:
Stable angina (exercise-induced) – diltiazem increases coronary blood flow and decreases myocardial oxygen consumption, secondary to decreased peripheral resistance, heart rate, and contractility.
Variant angina – it is effective owing to its direct effects on coronary dilation.
Unstable angina (preinfarction, crescendo) – diltiazem may be particularly effective if the underlying mechanism is vasospasm.
For supraventricular tachycardias, diltiazem appears to be as effective as verapamil in treating re-entrant supraventricular tachycardia.
Atrial fibrillation or atrial flutter PSVT is another indication. The initial bolus should be 0.25mg/kg, intravenous (IV).
Because of its vasodilatory effects, diltiazem is useful for treating hypertension. Calcium channel blockers are well tolerated, and especially effective in treating low-renin hypertension.

DOSE
The dose of diltiazem in supraventricular tachycardias is 0.25 mg/kg, slow IV push. Most commonly, a 20-mg IV dose is given to the average-sized patient.


DRUG INTERACTIONS
Beta-blockers
Intravenous diltiazem should be used with caution with beta-blockers because, while the combination is most therapeutically beneficial, there are rare instances of dysrhythmia and AV node block.
Quinidine
Quinidine should not be used concurrently with calcium channel blockers because of reduced clearance of both drugs and potential pharmacodynamic effects at the SA and AV nodes.
Miscellaneous
Diltiazem and verapamil inhibit hepatic cytochromes CYP3A4, CYP2C9 and CYP2D6, possibly resulting in drug interactions 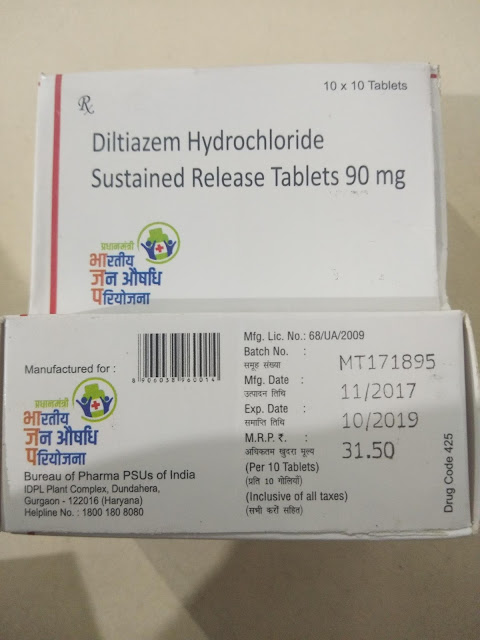 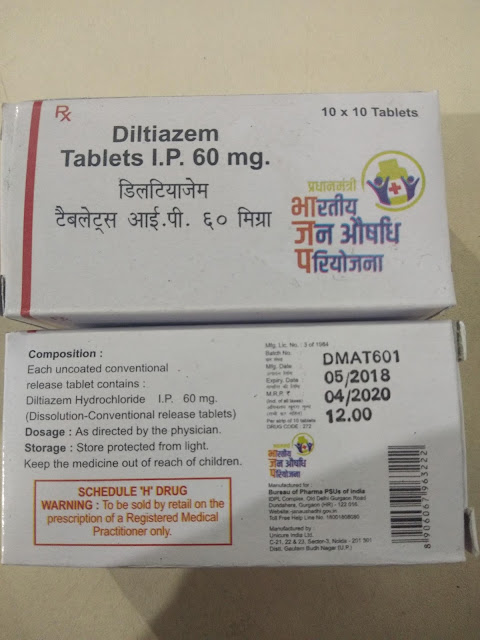 Posted by PRAVEEN JAS KOTTIYAM at 8:45 AM