Colistin (polymyxin E) is a polymyxin antibiotic produced by certain strains of Bacillus polymyxa var. colistinus. Colistin is a mixture of cyclic polypeptides colistin A and B. Colistin is effective against most Gram-negative bacilli and is used as a polypeptide antibiotic.
Colistin is a decades-old drug that fell out of favor due to its nephrotoxicity. It remains one of the last-resort antibiotics for multidrug-resistant Pseudomonas aeruginosa, Klebsiella pneumoniae, and Acinetobacter. New Delhi metallo-β-Lactamase multidrug-resistant Enterobacteriaceae have also shown susceptibility to Colistin. 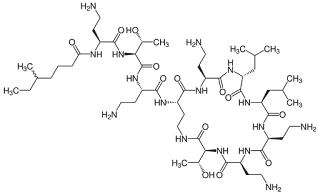 
MECHANISM OF ACTION
Colistin is polycationic and has both hydrophilic and lipophilic moieties. These poly-cationic regions interact with the bacterial outer membrane, by displacing bacterial counter ions in the lipopolysaccharide. Hydrophobic/hydrophillic regions interact with the cytoplasmic membrane just like a detergent, solubilizing the membrane in an aqueous environment. This effect is bactericidal even in an isosmolaric environment.

There is no clinically useful absorption of colistin from the gastrointestinal tract. For systemic infection, colistin must, therefore, be given by injection. Colistimethate is eliminated by the kidneys, but colistin is supposed to be eliminated by non-renal mechanism(s) that are as yet not characterised.
Adverse reactions

The main toxicities described with intravenous treatment are nephrotoxicity (damage to the kidneys) and neurotoxicity (damage to the nerves), but this may reflect the very high doses given, which are much higher than the doses currently recommended by any manufacturer and for which no adjustment was made for renal disease. Neuro- and nephrotoxic effects appear to be transient and subside on discontinuation of therapy or reduction in dose.
At a dose of 160 mg colistimethate IV every eight hours, very little nephrotoxicity is seen.Indeed, colistin appears to have less toxicity than the aminoglycosides that subsequently replaced it, and colistin has been used for extended periods of up to six months with no ill effects.
The main toxicity described with aerosolised treatment is bronchospasm, which can be treated or prevented with the use of beta2-agonists such as salbutamol or following a desensitisation protocol.

Email ThisBlogThis!Share to TwitterShare to FacebookShare to Pinterest
Labels: Bowel sterilisation, but the dosing is complicated, Colistin sulfate and colistimethate sodium may both be given intravenously, drugs, drugsinindia.com, GI infections, indian medicine, medicin in india, what is acid reflux
Location: Kollam, Kerala 691001, India