Candesartan  is an angiotensin II receptor antagonist used mainly for the treatment of hypertension. The prodrug candesartan cilexetil is marketed by AstraZeneca and Takeda Pharmaceuticals, commonly under the trade names Blopress, Atacand, Amias, and Ratacand. 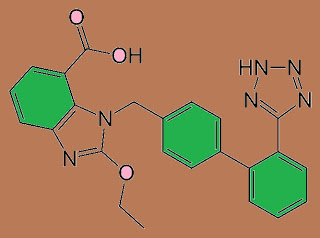 
USE
As all angiotensin II receptor antagonists, candesartan is indicated for the treatment of hypertension. Results from the CHARM study in the early 2000s demonstrated the morbidity and mortality reduction benefits of candesartan therapy in congestive heart failure. Thus, while ACE inhibitors are still considered first-line therapy in heart failure, candesartan can be used in combination with an ACE to achieve improved mortality and morbidity vs. an ACE alone and additionally is an alternative in patients intolerant of ACE inhibitor therapy.