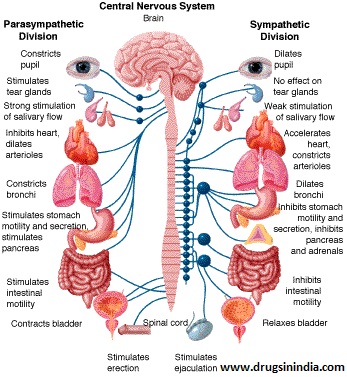 The central nervous system (CNS) is the part of the nervous system that integrates the information that it receives from, and coordinates the activity of, all parts of the bodies of bilaterian animals—that is, all multicellular animals except radially symmetric animals such as sponges and jellyfish. It contains the majority of the nervous system and consists of the brain and the spinal cord. Some classifications also include the retina and the cranial nerves in the CNS. Together with the peripheral nervous system, it has a fundamental role in the control of behavior. The CNS is contained within the dorsal cavity, with the brain in the cranial cavity and the spinal cord in the spinal cavity. In vertebrates, the brain is protected by tDuring early development of the vertebrate embryo, a longitudinal groove on the neural plate gradually deepens and the ridges on either side of the groove (the neural folds) become elevated, and ultimately meet, transforming the groove into a closed tube, the ectodermal wall of which forms the rudiment of the nervous system. This tube initially differentiates into three vesicles (pockets): the prosencephalon at the front, the mesencephalon, and, between the mesencephalon and the spinal cord, the rhombencephalon. (By six weeks in the human embryo) the prosencephalon then divides further into the telencephalon and diencephalon; and the rhombencephalon divides into the metencephalon and myelencephalon. 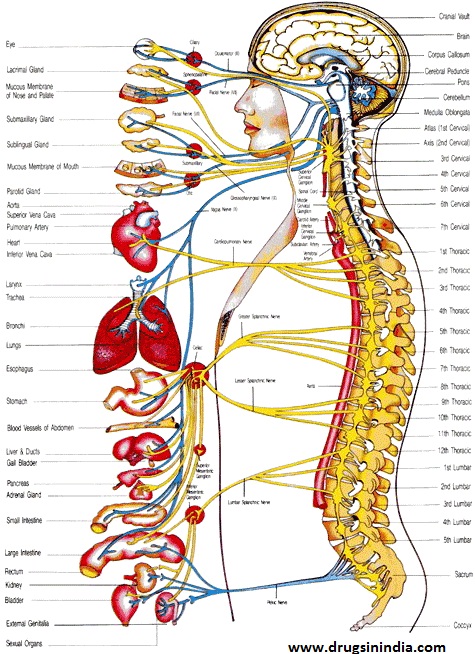 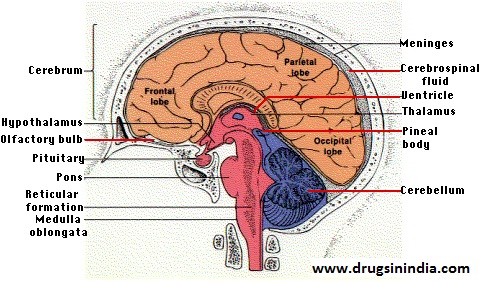 DEVELOPMENT
As the vertebrate grows, these vesicles differentiate further still. The telencephalon differentiates into, among other things, the striatum, the hippocampus and the neocortex, and its cavity becomes the first and second ventricles. Diencephalon elaborations include the subthalamus, hypothalamus, thalamus and epithalamus, and its cavity forms the third ventricle. The tectum, pretectum, cerebral peduncle and other structures develop out of the mesencephalon, and its cavity grows into the mesencephalic duct (cerebral aqueduct). The metencephalon becomes, among other things, the pons and the cerebellum, the myelencephalon forms the medulla oblongata, and their cavities develop into the fourth ventricle.
Planarians, members of the phylum Platyhelminthes (flatworms), have the simplest, clearly defined delineation of a nervous system into a central nervous system (CNS) and a peripheral nervous system (PNS).Their primitive brain, consisting of two fused anterior ganglia, and longitudinal nerve cords form the CNS; the laterally projecting nerves form the PNS. A molecular study found that more than 95% of the 116 genes involved in the nervous system of planarians, which includes genes related to the CNS, also exist in humans.Like planarians, vertebrates have a distinct CNS and PNS, though more complex than those of planarians.
The CNS of chordates differs from that of other animals in being placed dorsally in the body, above the gut and notochord/spine. The basic pattern of the CNS is highly conserved throughout the different species of vertebrates and during evolution. The major trend that can be observed is towards a progressive telencephalisation: the telencephalon of reptiles is only an appendix to the large olfactory bulb, while in mammals it makes up most of the volume of the CNS. In the human brain, the telencephalon covers most of the diencephalon and the mesencephalon. Indeed, the allometric study of brain size among different species shows a striking continuity from rats to whales, and allows us to complete the knowledge about the evolution of the CNS obtained through cranial endocasts.
Mammals – which appear in the fossil record after the first fishes, amphibians, and reptiles – are the only vertebrates to possess the evolutionarily recent, outermost part of the cerebral cortex known as the neocortex.The neocortex of monotremes (the duck-billed platypus and several species of spiny anteaters) and of marsupials (such as kangaroos, koalas, opossums, wombats, and Tasmanian devils) lack the convolutions – gyri and sulci – found in the neocortex of most placental mammals (eutherians). Within placental mammals, the size and complexity of the neocortex increased over time. The area of the neocortex of mice is only about 1/100 that of monkeys, and that of monkeys is only about 1/10 that of humans. In addition, rats lack convolutions in their neocortex (possibly also because rats are small mammals), whereas cats have a moderate degree of convolutions, and humans have quite extensive convolutions. Extreme convolution of the neocortex is found in dolphins, possibly related to their complex echolocation
Diseases of the central nervous system
There are many central nervous system diseases, including infections of the central nervous system such as encephalitis and poliomyelitis, neurodegenerative diseases such as Alzheimer's disease and amyotrophic lateral sclerosis, autoimmune and inflammatory diseases such as multiple sclerosis or acute disseminated encephalomyelitis, and genetic disorders such as Krabbe's disease, Huntington's disease, or adrenoleukodystrophy. Lastly, cancers of the central nervous system can cause severe illness and, when malignant, can have very high mortality rates.
Specialty professional organizations recommend that neurological imaging of the brain be done only to answer a specific clinical question and not as routine screening.
Posted by PRAVEEN JAS KOTTIYAM at 6:00 PM