Imatinib, marketed by Novartis as Gleevec (U.S.) or Glivec (Europe/Australia/Latin America), and sometimes referred to by its investigational name STI-571, is a tyrosine-kinase inhibitor used in the treatment of multiple cancers, most notably Philadelphia chromosome-positive (Ph+) chronic myelogenous leukemia (CML). Like all tyrosine-kinase inhibitors, imatinib works by preventing a tyrosine kinase enzyme, in this case BCR-Abl, from phosphorylating subsequent proteins and initiating the signaling cascade necessary for cancer development, thus preventing the growth of cancer cells and leading to their death by apoptosis. Because the BCR-Abl tyrosine kinase enzyme exists only in cancer cells and not in healthy cells, imatinib works as a form of targeted therapy—only cancer cells are killed through the drug's action. In this regard, imatinib was one of the first cancer therapies to show the potential for such targeted action, and is often cited as a paradigm for research in cancer therapeutics.
Imatinib has been cited as the first of the exceptionally expensive cancer drugs, costing $92,000 a year. Doctors and patients complain that this is excessive, given that its development costs have been recovered many times over, and that the costs of synthesizing the drug are orders of magnitude lower. In the USA, the patent protecting the active principle will expire on 4 January 2015 while the patent protecting the beta crystal form of the active principal ingredient will expire on 23 May 2019.
The developers of imatinib were awarded the Lasker Award in 2009 and the Japan Prize in 2012. 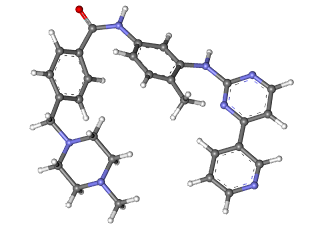 USE
Imatinib is used to treat chronic myelogenous leukemia (CML), gastrointestinal stromal tumors (GISTs) and a number of other malignancies. One study demonstrated that imatinib mesylate was effective in patients with systemic mastocytosis, including those who had the D816V mutation in c-Kit.However, since imatinib binds to tyrosine kinases when they are in the inactive configuration and the D816V mutant of c-Kit is constitutively active, imatinib does not inhibit the kinase activity of the D816V mutant of c-Kit. Experience has shown, however, that imatinib is much less effective in patients with this mutation, and patients with the mutation comprise nearly 90% of cases of mastocytosis.

ADVERSE EFFECTS
The most common side effects include: feeling sick (nausea), diarrhoea, headaches, leg aches/cramps, fluid retention, visual disturbances, itchy rash, lowered resistance to infection, bruising or bleeding, loss of appetite; weight gain, reduced number of blood cells (neutropenia, thrombocytopenia, anemia), and edema.
Severe congestive cardiac failure is an uncommon but recognized side effect of imatinib and mice treated with large doses of imatinib show toxic damage to their myocardium.
If imatinib is used in prepubescent children, it can delay normal growth, although a proportion will experience catch-up growth during puberty. 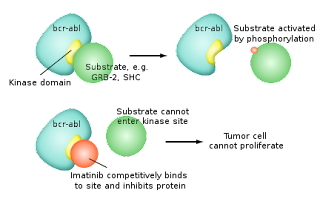 Imatinib is a 2-phenyl amino pyrimidine derivative that functions as a specific inhibitor of a number of tyrosine kinase enzymes. It occupies the TK active site, leading to a decrease in activity.
There are a large number of TK enzymes in the body, including the insulin receptor. Imatinib is specific for the TK domain in abl (the Abelson proto-oncogene), c-kit and PDGF-R (platelet-derived growth factor receptor).
In chronic myelogenous leukemia, the Philadelphia chromosome leads to a fusion protein of abl with bcr (breakpoint cluster region), termed bcr-abl. As this is now a constitutively active tyrosine kinase, imatinib is used to decrease bcr-abl activity.
The active sites of tyrosine kinases each have a binding site for ATP. The enzymatic activity catalyzed by a tyrosine kinase is the transfer of the terminal phosphate from ATP to tyrosine residues on its substrates, a process known as protein tyrosine phosphorylation. Imatinib works by binding close to the ATP binding site of bcr-abl, locking it in a closed or self-inhibited conformation, and therefore inhibiting the enzyme activity of the protein semi-competitively. This fact explains why many BCR-ABL mutations can cause resistance to imatinib by shifting its equilibrium toward the open or active conformation.
Imatinib is quite selective for bcr-abl – it does also inhibit other targets mentioned above (c-kit and PDGF-R), but no other known tyrosine kinases. Imatinib also inhibits the abl protein of non-cancer cells but cells normally have additional redundant tyrosine kinases which allow them to continue to function even if abl tyrosine kinase is inhibited. Some tumor cells, however, have a dependence on bcr-abl. Inhibition of the bcr-abl tyrosine kinase also stimulates its entry in to the nucleus, where it is unable to perform any of its normal anti-apoptopic functions.
The Bcr-Abl pathway has many downstream pathways including the Ras/MapK pathway, which leads to increased proliferation due to increased growth factor-independent cell growth. It also affects the Src/Pax/Fak/Rac pathway. This affects the cytoskeleton, which leads to increased cell motility and decreased adhesion. The PI/PI3K/AKT/BCL-2 pathway is also affected. BCL-2 is responsible for keeping the mitochondria stable; this suppresses cell death by apoptosis and increases survival. The last pathway that Bcr-Abl affects is the JAK/STAT pathway, which is responsible for proliferation.

COST
In 2013, more than 100 cancer specialists published a letter in Blood saying that the prices of many new cancer drugs, including imatinib, is so high that U.S. patients couldn't afford them, and that the level of prices, and profits, was so high as to be immoral. Signatories of the letter included Brian Druker, Carlo Gambacorti-Asserini, and John Goldman, developers of imatinib. In 2001, imatinib was priced at $30,000 a year, which was based on the price of interferon, then the standard treatment, and would have recouped the development costs in 2 years. After unexpectedly becoming a blockbuster, its price was increased to $92,000 per year in 2012, with annual revenues of $4.7 billion. All its research and development costs were covered in the first $1 billion, and everything else was profit. Other doctors have complained about the cost. For GIST the cost is $64,800 a year.
Prices for a 100 mg pill of Gleevec internationally range from $20 to $30,although generic imatinib is cheaper, as low as $2 per pill.

Posted by PRAVEEN JAS KOTTIYAM at 8:27 AM