Hydrochlorothiazide, abbreviated HCTZ, HCT, or HZT, is a diuretic drug of the thiazide class that acts by inhibiting the kidneys' ability to retain water. This reduces the volume of the blood, decreasing blood return to the heart and thus cardiac output and, by other mechanisms, is believed to lower peripheral vascular resistance.
Hydrochlorothiazide is a calcium-sparing diuretic, meaning it can help the body get rid of excess water while still keeping calcium. 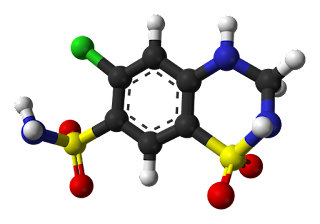 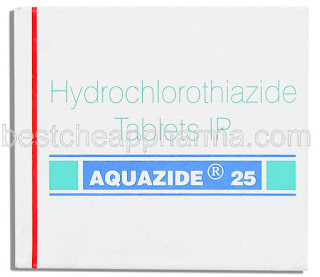 6-chloro-1,1-dioxo-3,4-dihydro-2H-1,2,4-benzothiadiazine-7-sulfonamide
use
Hydrochlorothiazide is frequently used for the treatment of hypertension, congestive heart failure, symptomatic edema, diabetes insipidus, renal tubular acidosis, and the prevention of kidney stones.
It is also sometimes used for hypercalciuria, Dent's disease and Ménière's disease. For diabetes insipidus, the effect of thiazide diuretics is presumably mediated by a hypovolemia-induced increase in proximal sodium and water reabsorption, thereby diminishing water delivery to the ADH-sensitive sites in the collecting tubules and reducing the urine output.
Thiazides are also used in the treatment of osteoporosis. Thiazides decrease mineral bone loss by promoting calcium retention in the kidney, and by directly stimulating osteoblast differentiation and bone mineral formation.


MECHANISM OF  ACTION
Hydrochlorothiazide belongs to thiazide class of diuretics. It reduces blood volume by acting on the kidneys to reduce sodium (Na) reabsorption in the distal convoluted tubule. The major site of action in the nephron appears on an electroneutral Na+-Cl- co-transporter by competing for the chloride site on the transporter. By impairing Na transport in the distal convoluted tubule, hydrochlorothiazide induces a natriuresis and concomitant water loss. Thiazides increase the reabsorption of calcium in this segment in a manner unrelated to sodium transport. Additionally, by other mechanisms, HCTZ is believed to lower peripheral vascular resistance.

Prohibited use in sport
Hydrochlorothiazide was detected in the urine of the Russian cyclist Alexandr Kolobnev during the 2011 Tour de France. Kolobnev was the only cyclist to leave the 2011 race in connection with adverse findings at a doping control. While Hydrochlorothiazide is not itself a performance-enhancing drug, it may be used to mask the use of performance-enhancing drugs, and is classed by the World Anti-Doping Agency as a "specified substance". Kolobnev was subsequently cleared of all charges of intentional doping.